FM Corey Acor wins the Florida Master Bullet Showdown after winning the final against FM Dalton Perrine by a convincing score of 15.5-4.5!

Corey was seeded 2nd based on classical ratings at the start of the tournament but many had him as a clear favorite going in based on his online bullet rating and his overall reputation as a beast in the shorter time controls. Corey did not disappoint and was never in danger in his run to the finals, with the closest match happening in the quarterfinal where Corey beat NM Ryan Hamley by 15.5-7.5.

In the other half of the bracket, we saw another great run by FM Dalton Perrine who won the Master Blitz Showdown earlier in the year. Dalton convincingly beat NM Makaio Krienke and NM Yan Miellier in the first two rounds before taking out the #1 seed, IM John Ludwig, in a brilliant comeback after being down 8-2 early in the match.

After the success of the Blitz Showdown, Orlando Chess House is happy to present the Florida Master Bullet Showdown! The knockout format remains the same as for blitz, but each match will be contested over best of 30 1+0 games! We once again have a very strong field with many of Florida's strongest masters participating. For this event such strong players as FM Corey Acor and CM Antonio Arencibia have been added to the field. All matches can be followed with live commentary on

FM Dalton Perrine is the winner of the Florida Master Blitz Showdown after defeating NM Ryan Hamley in the final by 9-6! Dalton's biggest test came in round 1 against Andy Yang where he had to rally from behind to win the match 8.5-7.5 in dramatic fashion. From there through the rest of the tournament, Dalton always seemed in control in his matches as he defeated NM Theo Slade and IM John Ludwig on his way to the final, although John was struggling with a poor internet connection for their match.

In total, we received $105 in donations throughout the tournament, of which 90% was distributed to the players. The prizes were:

Orlando Chess House is happy to present the Florida Master Blitz Showdown! Over the course of June, several of Florida’s strongest masters will battle it out in a series of knockout matches until only one is left standing! Each match will consist of 16 3-minute games and will be streamed with live commentary on Twitch!

Here is the full bracket for the tournament: 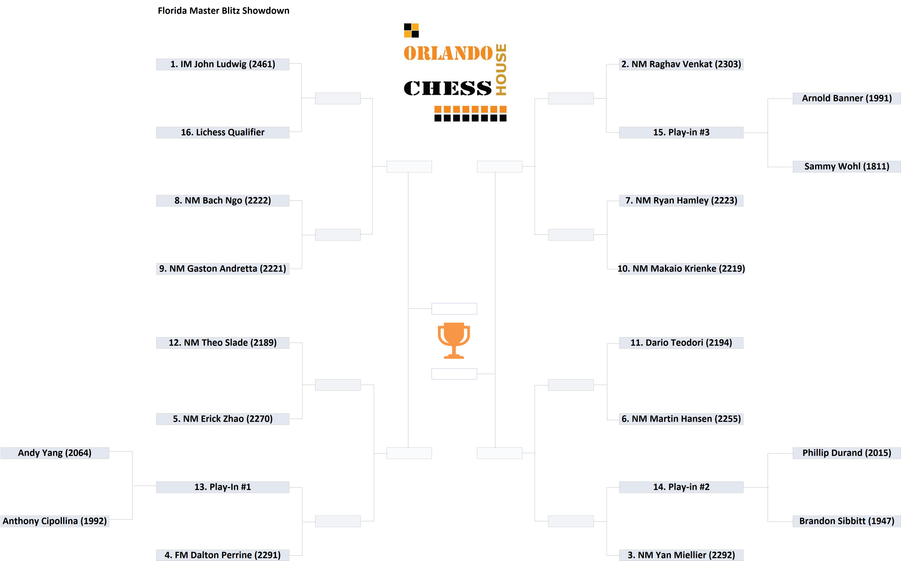 12 Masters are invited directly into the main bracket, while 3 spots are decided through play-in matches. The last spot will be decided in an open qualifier for Florida players that will be held on Lichess on 5/30.

Each match will consist of 16 3-minute games to be played on Lichess and will be streamed with live commentary on https://www.twitch.tv/orlandochesshouse.

In case a match is tied at 8-8 after the 16 scheduled games, 2 additional blitz games will be played. If still tied, another pair of games is played. If a match remains tied at 10-10, the two players will play an Armageddon game where White has 3 minutes against 2:30 for Black, but Black advances with a draw.

There is a scheduled 10-minute break after 8 games in each match, and both players can call 1 additional 5-minute “un-tilt” break, at any point in the match. The time and date for the matches will be announced as they get scheduled at a time that fits both players.

If any donations are received during the streaming of the matches, 90% will be distributed to the participants in the tournament, with 40% going to the winner of the tournament, 25% to the runner up and 12.5% to each semifinalist!